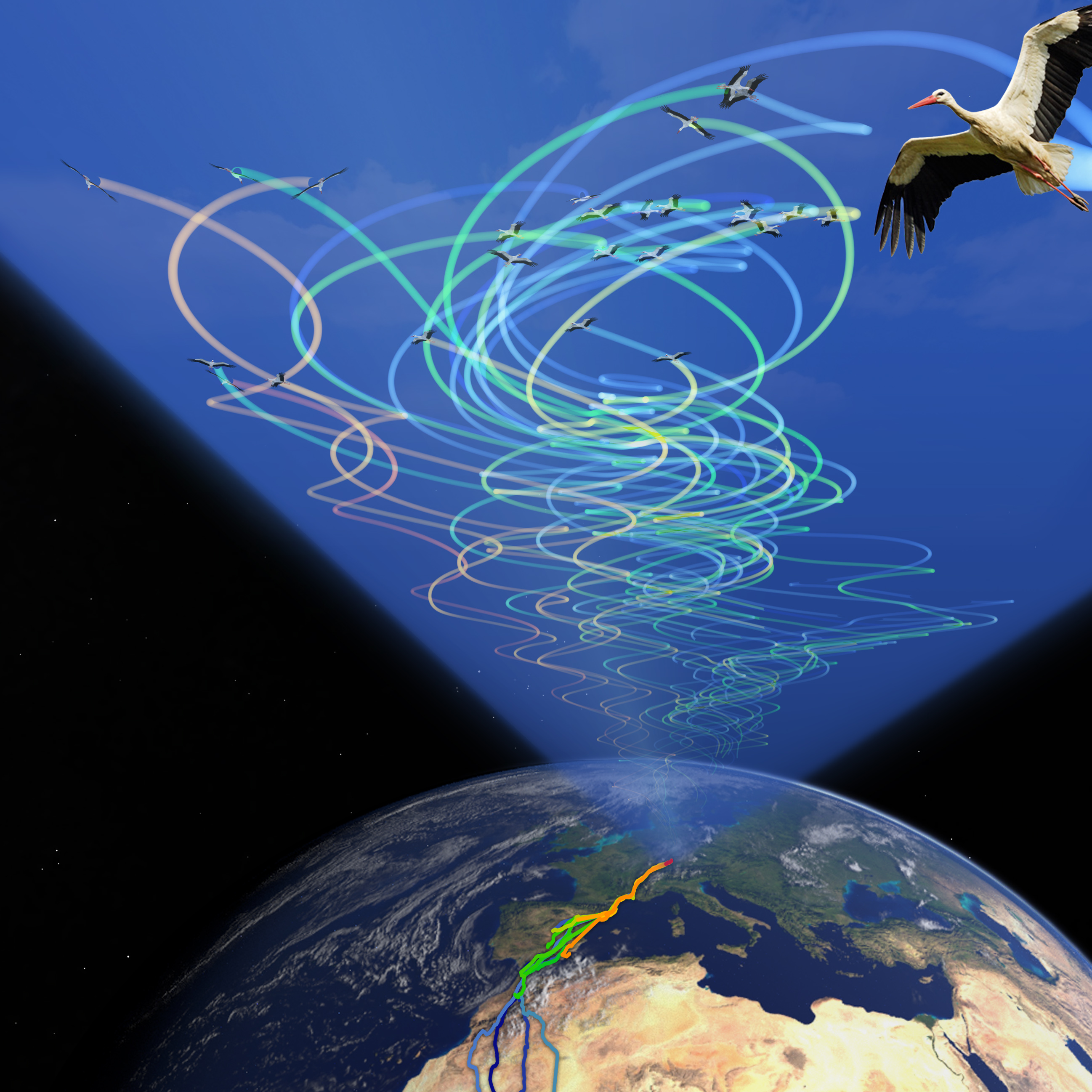 PNAS - The geometry of decision-making in individuals and collectives

Current Biology - Our new paper is out!

Searching together: a lesson from rats

Concentrate on your own task but also pay attention to others—this is the key rule for success, at least for rats when exploring as a group

The rat in a maze might be one of the most classic paradigms in the study of behaviour, but an international team of scientists has put a twist on this experimental motif to push the leading edge of technology and research into search strategies of collectives.

Reporting in Current Biology, the researchers describe the innovation of placing rats into a maze—not alone—but in groups in order to study their problem-solving behaviour. The study, which uses automated video tracking of the rodents simultaneously exploring their environment, reveals that rats use simple behavioural rules to achieve superior search performances in groups.

“We found that groups outperform single individuals in searching for a target, even when they have limited ability to communicate or share information. By uncovering the simple search strategy used by these groups, our study provides the means of directly inspiring algorithms for collective search applications,” says lead author Máté Nagy, who conducted this research when he was at the Max Planck Institute of Animal Behavior Department of Collective Behaviour and the University of Konstanz and previously at Eötvös University and the Hungarian Academy of Sciences.

Rethinking rat in a maze

For decades, scientists have been using a classical experimental search task—which involves placing a single rat in a complex maze to search for a reward—to deepen understanding of navigation, memory, and learning. However, rats are highly social animals that build and live in complex burrow systems in nature. Yet very little is known about how they explore as a group. In the new study, researchers from institutes in Germany and Hungary turned the classical experimental search task into the first experimental study on rodent group search behaviour in a confined maze.

“Rats have long been considered as one of the most suitable model organisms of humans. Using a group of rats to model collective problem solving has pinpointed basic mechanisms employed by rodents and lent insight into underlying rules of how individuals enhance search performance by being in groups,” says senior author Tamás Vicsek from Eötvös University, one of the founders of the collective behaviour research field, and initiator of the idea to study collective exploration in this research project.

Researchers sought to answer questions about how individuals make decisions in a group with a common target. For instance, how much should individuals concentrate on searching alone versus paying attention to what others are doing? And, how much is communication and coordination between the group members necessary?

The researchers designed and built a relatively large and complex maze with 16 endpoints. The structure of the maze meant that rats could only see others in very close proximity.  Each endpoint was equipped with a water dispenser, but only one of these provided a water reward. In the search task, rats had the opportunity to locate the water reward, either alone or in groups of eight. The time taken for rats to locate the reward was measured. Rats were tracked and their individual trajectories reconstructed via automated tracking software, which allowed for deciphering the underlying characteristics of search behaviour.

The optimal balance between individual and collective

Rats in a group performed better in the search task compared to when they were on their own. When the researchers took a close look at the decisions of rats at the maze junctions, they found that the actions of those in groups could be boiled down to simple rules:  go down unexplored paths but follow other rats.

In order to confirm the generality of these rules, the researchers carried out computational modelling with large numbers of simulations to show the search performance result of different combinations of these simple rules. They found that that when searching as a group, individuals performed best if they had the right balance between solo exploration and following others. Both extremes—ignoring others completely or following others too much—resulted in lower performance for the group as a whole, as well as for each of the members on the long run.

“In the past, scientists have described many examples of how individuals improve their navigational efficiency by following others, or by being in a group. In this study, we have combined two classical experimental components to reveal the mechanisms behind such group navigation in detail: a maze solving task performed by the highly social rat as model organisms. Using this unique combinations, we succeeded in uncovering the search strategy that allows groups to outperform individuals,” says Andrea Flack, a group leader in the Max Planck Institute of Animal Behaviour and the University of Konstanz, and co-author on the study.

The researchers say the simple decision-making rules will open doors to designing algorithms for artificial systems. “These can include tasks when a group of autonomous robots explore complex, labyrinth-like environments where only limited communication is possible, like in abandoned mines,” says Nagy who is now head of the Collective Behaviour 'Lendület' Research Group in the Hungarian Academy of Sciences and Eötvös University.

Robots help to answer age-old question of why fish school

A fish school is a striking demonstration of synchronicity. Yet centuries of study have left a basic question unanswered: do fish save energy by swimming in schools? Now, scientists from the Max Planck Institute of Animal Behavior (MPI-AB), the University of Konstanz, Peking University and Eötvös Lóránd University have provided an answer that has long been suspected but never conclusively supported by experiments: yes.

Using biomimetic fish-like robots, the researchers show that fish could take advantage of the swirls of water generated by those in front by applying a simple behavioural rule. By adjusting their tail beat relative to near neighbours—a strategy called vortex phase matching—robots were shown to benefit hydrodynamically from a near neighbour no matter where they are positioned with respect to that neighbour. The previously unknown rule, revealed by the robots, was subsequently shown to be the strategy used by free swimming fish. The study is reported on 26 October in Nature Communications.

“Fish schools are highly dynamic, social systems,” says senior author Iain Couzin, Director of the MPIAB who also co-directs the Cluster of Excellence ‘Centre for the Advanced Study of Collective Behaviour’ at the University of Konstanz. “Our results provide an explanation for how fish can profit from the vortices generated by near neighbours without having to keep fixed distances from each other.”

Answering the question of whether or not fish can save energy by swimming with others requires measuring their energy expenditure. Accurately doing so in free swimming fish has so far not been possible, and so past studies have sought to answer this question instead through theoretical models and predictions.

The new study, however, has overcome this barrier to experimental testing. The researchers developed a 3D robotic fish that has a soft tail fin and swims with an undulating motion that mimics accurately the movement of a real fish. But unlike their live counterparts, the robots allow for direct measurement of the power consumption associated with swimming together versus alone.

“We developed a biomimetic robot to solve the fundamental problem of finding out exactly how much energy is used in swimming,” says Liang Li, a postdoctoral fellow at the MPI-AB and first author on the study. “If we then have multiple robots interacting, we gain an efficient way to ask how different strategies of swimming together impact the costs of locomotion.”

A simple rule for swimming in a school

The researchers studied robotic fish swimming in pairs versus alone. Running over 10,000 trials, they tested follower fish in every possible position relative to leaders—and then compared energy use with solo swimming.

The results showed a clear difference in energy consumption for robots that swam alone versus those that swam in pairs. The cause of this, they discovered, is the way that fish in front influence the hydrodynamics of fish behind. The energy consumed by a follower fish is determined by two factors: distance behind the leader and the timing of tail beats.

To save energy, it turns out that the secret is in synchronisation. That is, follower fish must match their tail beat to that of the leader with a specific time lag based on the spatial position—a strategy the researchers called “vortex phase matching.” When followers are beside leader fish, the most energetically effective thing to do is to synchronise tail beats with the leader. But as followers fall behind, they should go out of synch having more and more lag as compared to the tail beat of the leader.

In order to visualise the hydrodynamics, researchers emitted tiny hydrogen bubbles into the water and imaged them with a laser—a technique that made the vortices created by the swimming motion of the robots visible. This showed that vortices are shed by the leader fish and move downstream. It also showed that robots could utilise these vortices in various ways. “It’s not just about saving energy. By changing the way they synchronise, followers can also use the vortices shed by other fish to generate thrust and help them accelerate,” says co-author Mate Nagy, head of the Collective Behaviour 'Lendület' Research Group in the Hungarian Academy of Sciences and Eötvös University, who conducted the work mostly when he was a postdoctoral fellow at the MPI-AB.

The result in real fish

Says Couzin: “We discovered a simple rule for synchronising with neighbours that allows followers to continuously exploit socially-generated vortices. But before our robotic experiments, we simply didn’t know what to look for, and so this rule has been hidden in plain sight.”